Sometimes we need to be attacked by words to see a new light. I had commented on a Facebook group on how I felt about adoption. Because I am a birth mother and an adoptive mother I have positive feelings towards it. The response I got was from adult adoptees – they were angry that I could place a child and then “double dip” from the adoption pool. (exact quote). I was so taken back at all the negativity and ugliness I received. It made me second guess myself. But then I realized…there is a whole side of adoption that I need to learn more about.

I have talked to and met several people who have adoption as part of their lives. This is my first interview with a gal that was in the foster system for a few years and then was adopted. Adoption, while it can have beautiful parts, can also have sad and traumatic circumstances too. It is important to learn ALL sides. That will result in more understanding around adoption – and helps us learn more.  I sometimes forget the feelings and trauma that the adoptee might experience in their lifetime. Trauma is part of adoption – it may not show up right away – it may take years. But while parents gain from adoption – children have loss and grief and feelings of abandonment. We need to remember this.

Hi I’m Kasey. I am 40 years old and I currently live in Florida. I have been happily married for ten years to a wonderful man. We have one fur baby named Pebbles.

You were adopted through the foster care system…How old were you when you were adopted? If you were old enough to remember – what memories of this time in your life do you have?

I was nine when I was officially adopted. I came to live with my parents when I was 6. They also adopted three of my biological siblings and another sibling from a different family. (This is their second marriage) Together they already had five adult children.

My memories include being made to pack my stuff to move out of the foster home I was in. (Turns out the foster father had cancer. At that time they didn’t allow single parents to adopt.) ( This family “The Wilson’s” were planning on adopting my sister and I before the cancer.) I remember being told we couldn’t bring all our toys and clothes. They didn’t know where we were going and other kids might be jealous. (We were told that by the social worker.)

I cried the whole trip to the new house. I was bound and determined not to like these new people. My Dad still tells people how I was crying when he first saw us. I remember walking in and seeing two more of my siblings. I was surprised and relieved (some). It turned out they had been visiting with these siblings for months. They got a phone call just hours before we arrived asking if they would take two more from the same sibling group. I remember it was supper time. The table was set with pork chops, green beans, lima beans, macaroni and cheese and biscuits. It was the biggest spread I had ever seen.

I remember being suspicious of everything. I didn’t trust anyone or anything. I remember seeing my Mom with hair down once and went running back into the room screaming she is a witch! Don’t trust her ! She’s a witch! (She just laughed this off)

We still had visitation with our birth parents. Sometimes they showed and sometimes they didn’t. I didn’t have any trust for them. I recall being nervous every time we went to see them. I recall my then foster Mom patting my leg. One day I asked her why she did that. (I thought it meant I was in trouble) She told me she wanted to calm me and for me to know she cared.

I remember we begged her to find our younger sibling and take him in.

I remember the fight our then foster parents had with my older sibling. I recall wanting to go downstairs but I was too scared. I still wish I went downstairs that night. I still hear two different stories from that night. My sibling said she was pushed down the steps. They said she fell. The next day she was in a car and leaving. I felt sad and wanted to go with her.

About a year or so after moving with them our younger sibling moved in.

We use to sit around asking each other if we wanted them to adopt us. No one said yes or no. I think we all silently thought this abuse is better than the abuse we dealt with before. It was better than the unknown.

My Mom sewed us dresses for our adoption and got our brother a suit. They made a whole day of it and had a adoption dinner out. We took professional pictures. We got to pick our own new names.

What was dialogue in your home like surrounding adoption?

They never talked negative about our birth parents. They wanted us to make up our own minds. We talked about it as we wished. As they were older many people thought they were our grandparents. Our younger brother from the other family was only two when we got him. They told him all the time about his other Mom.

Overall, do you find adoption a positive part of your life? Yes or no and why?

Yes. Mostly I feel blessed to be adopted because many children age out of the system. Also I know my childhood was much better than it would have been.

Do you have a relationship with your birth parents? What is you status on all that and thoughts about reunion?

I reunited with my birth family at 18. Honestly I feel I was too immature and not emotionally ready. My birth father would only talk to me when my older sister was in the room. Then would say I only talked when she was around. I never became close with him. I always felt weird around him. When he passed I was told I wasn’t wanted at his funeral because it was my fault I was adopted.

As for my Birth Mother…She told my older sibling she didn’t want to be her mom or the younger ones Mom. I knew to guard my heart… Our relationship has never been Mother and daughter. She told me many times she is sorry. I truly believe she has mental issues she’s never dealt with. I still try but I don’t know how to say it… she’s always been out there.

As an adoptee, what kind of feelings growing up did you have – towards your adoptive family?
I blocked some of my memories from my early childhood. I wanted to meet my birth family but I never knew what they would be like or what to expect. Sometimes I would look for familiar faces in the crowd like when I’m at Walmart.

Most importantly, what do you want all adoptive parents to know? Especially when it comes to understanding their own 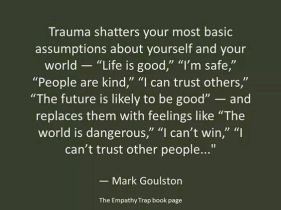